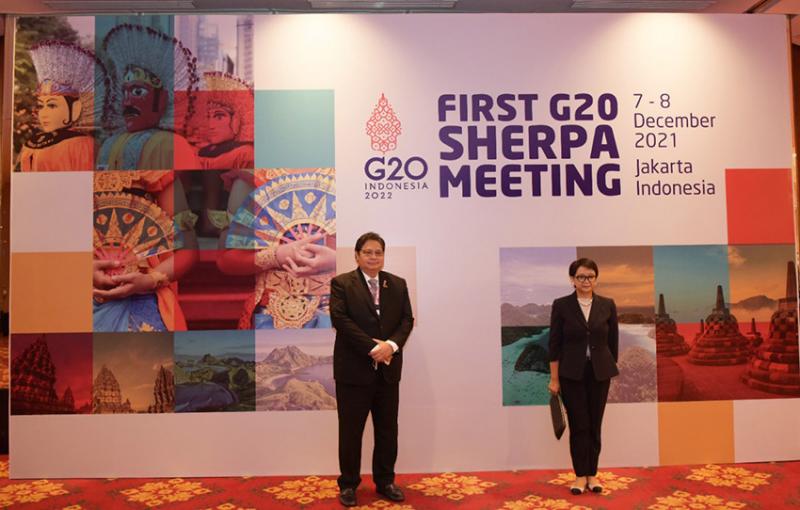 JAKARTA, BALITACERDAS.COM – The 1st G20 Sherpa meeting in Jakarta from 7-8 December 2021 launched Indonesia’s G20 Presidency in 2022. Overall, the meetings were held successfully in a safe and conducive manner. A hybrid system was used as a means to facilitate the participation of all delegates whether online or offline.

This initial meeting gave insight towards Indonesia’s dedication and intent with regards to hosting the G20 Presidency as great care was shown in facilitating this meeting. In order to ensure the effectiveness and safety of the meeting, strict health and safety protocols were implemented by the Indonesian government. A total of 21 delegates were present in Jakarta, 14 nations participated through online channels and three nations attended using a hybrid approach.

Meticulous procedures and measures were initiated from the very start of the meetings until the end. Before traveling, delegates who intend to travel to Indonesia were fully vaccinated and must report a negative PCR test result taken at least 3 x 24 hours before travel. In addition, delegates had to download the contact tracing application, PeduliLindungi, upon entering the country. Delegates of G20 were also provided a designated route in order to minimize the risk of contraction with other traveling parties or the general public.

A bubble protocol was implemented as a prevention measure by the government to confirm the safety of the G20 delegates during the proceeds of the 1st Sherpa Meeting. Reports show that a total of 664 tests conducted indicated negative results. These tests were conducted from arrival until the departure of the delegates for the 1st Sherpa meeting.

The detailed health and safety protocols were direct instructions from President Joko Widodo during a meeting that evaluated the Pemberlakuan Pembatasan Kegiatan Masyarakat (PPKM) (large-scale social restrictions) program which was broadcast through Sekretariat Presiden YouTube channel on the 22nd of November 2021. President Joko Widodo emphasized the importance of a strict protection for the delegates from arrival, to the venue and also within the hotel.

Indonesia’s ability to manage risk regarding the pandemic is a critical aspect in ensuring a conducive, efficient, and well-run G20 Presidency. These measures and protocols are a reflection of Indonesia’s commitment and efforts in hosting G20 Presidency that hopes to bring forth national and global economic recovery that leads to progress in the future.*